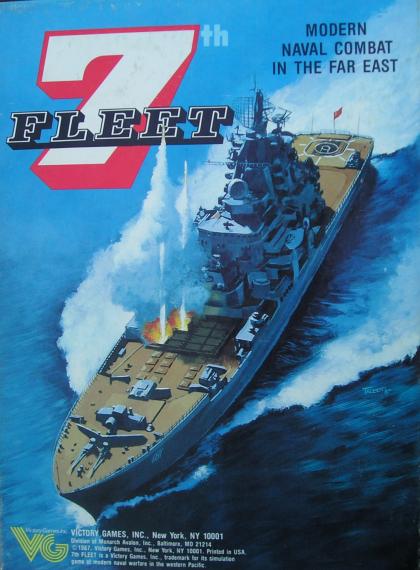 The third in the Fleet Series of 1980's era naval warfare, 7th Fleet's focus is the Pacific ocean from the Sea of Okhotsk to the northern Philippines and from the coast of China to Guam. Hexes are approx. 45 nautical miles across.

Players maneuver task forces of ships and submarines along with air wings to attack the opposing force. All ships, subs, and aircraft have various ratings for surface-to-surface missile, anti-air, area anti-air, anti-sub, close defense, air-to-air, and torpedo combat as well as defense, movement, and detection ratings (subs only).

Units include numerous aircraft, ships, and sub types from mainly the US, Japan, Soviet Union, and China as well as miscellaneous units from Canada, Vietnam, North and South Korea, and Australia—everything from F-15s to Romeo subs to Nimitz carriers.

Each 8-hour game turn is broken into 3 distinct phases (sub, surface, and air) and each player takes turns choosing which phase they wish to conduct. Ex. if the US player chooses "Air", they conduct all bombing, shipping strikes, anti-sub, and interception actions for all their aircraft.

Players also use their units to attempt to "detect" enemy forces so that an attack can be made. Ships and aircraft are always detected once a unit moves close enough to them, but players have to roll to try to detect subs.