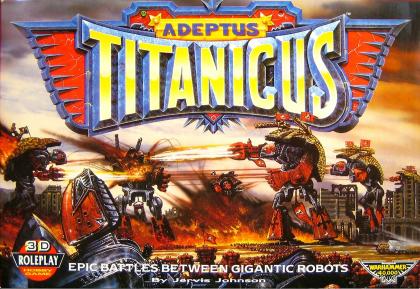 Adeptus Titanicus was the first game introducing the Epic system. You control a number of Imperial Battle Titans, while your opponent controls some Chaos Titans. You reenact battles from the Horus Heresy. The Titans are modular in design and so you could adapt the armaments of the Titans to suite the battle you will be fighting.

This was added to with Space Marine, which added infantry to the system. Articles also appeared in White Dwarf which allowed you to use the war machines of other races. The final expansion for this, the first edition of Epic, Codex Titanicus finalized the rules first introduced in Adeptus Titanicus & Space Marine Ed 1.