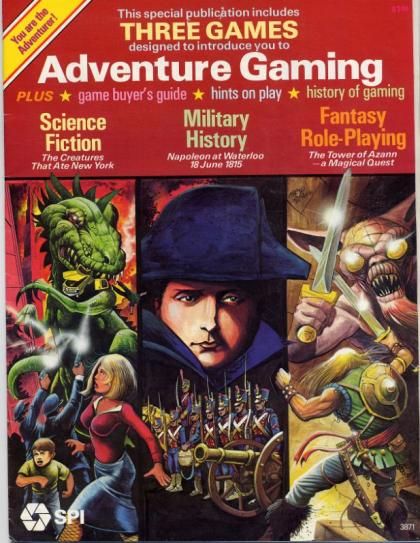 SPI's Adventure Gaming is an introductory booklet that included three small-format games selected to represent the scope of the SPI product line: The Creatures that Ate New York, Napoleon at Waterloo, and The Tower of Azann.

The Creatures that Ate New York is a lightweight takeoff on The Creature that Ate Sheboygan. Up to seven players may play. Each player has a secret objective, which could involve destroying a certain Manhattan location or just beating up on the other monsters.

Napoleon at Waterloo was one of SPI's standard introductory games. It is a traditional two-player wargame designed by James Dunnigan.

The Tower of Azann is billed as fantasy role-playing, however it is closer to choose your own adventure. One or more players have characters journeying through the Tower. Unlike the other two entries, this game did not include counters or a map. No gamemaster is needed, the game is based on a paragraph system and movement between the rooms is sometimes governed by a die roll.