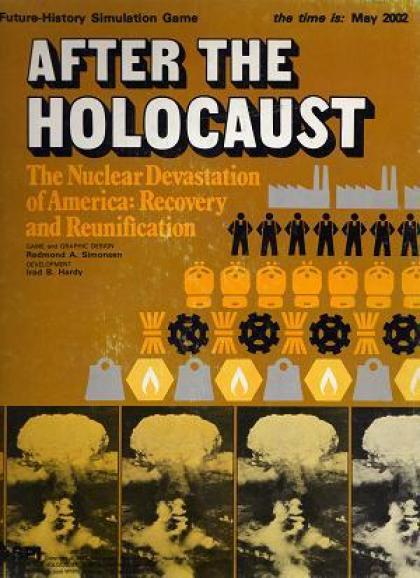 After the Holocaust is an economic, military, and political simulation of events in the United States, twenty years after a large-scale thermonuclear exchange with the Soviet Union. The game is ten turns long, and is designed for four players, each of whom controls a different region of North America and part of Canada. These regions are the Northeast, the Midwest, the Southwest, and the Far West. It is reminsicent of the works of Stafford Beer and Proyecto Synco.

The first is the Production Round, which includes a basic production phase, a secondary production phase, and a mobilization phase. Second is the Trade Round. Third is the Consumption Round, during which a player expends food points, expends consumer points, calculates and declares social status, and provides military supply for any combat units under his control. Fourth is the Military/Political Round, which begins with the political placement phase, followed by initial military movement, secondary military movement, combat, and elections. The fifth and last round of the game turn is the Finance Round, which includes the political disassociation phase, the stockpile/labour reallocation phase, industrial investment phase, taxation, the industrial capacity adjustment phase, the industrial labour reallocation phase, and finally, the depreciation and shrinkage phase.

In addition, immediately before the fourth and eighth game turns, the Population Growth Cycle occurs during which the labour population of each region increases by 10%.

Recensioni su After the Holocaust Indice ↑

Eventi riguardanti After the Holocaust Indice ↑

Video riguardanti After the Holocaust Indice ↑

Voti e commenti per After the Holocaust