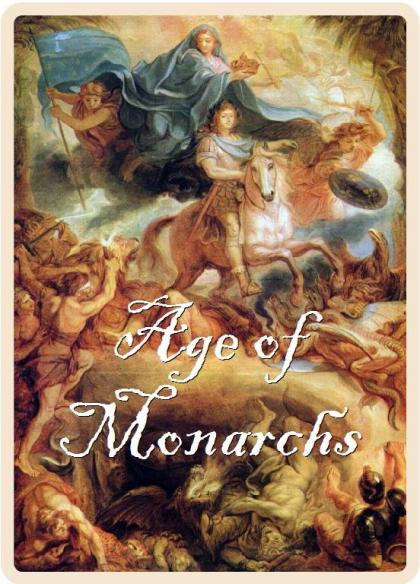 Age of Monarchs is a multiplayer card-driven grand strategy game simulating the three centuries of Modern Age, from the discovery of America by Columbus in 1492 to the fall of the Bastille in 1789. Players are put upon the highest bench of an European monarchy, assuming the leadership of a major European Power, and struggle to achieve the global supremacy all over the world in the Age of Absolutism. Being so an absolute monarch, each player will have to manage every kind of matters: economy, politics, diplomacy, trade, world wide exploration, colonization, religion and warfare.

Age of Monarchs is designed to offer an accurate and detailed historical context, supported by more than 160 strategy cards that simulate the most outstanding historical events and force players to face constantly the toughest challenges that occurred during the three centuries covered by the game timeline.

The game offers a wide set of short scenarios and a Grand Campaign 1492-1789, spanning for 20 turns, that will put the most powerful European nations in the never ending struggle for world domination.

In Age of Monarchs players take the role of the absolute monarch of a Major Power. Monarchs are represented by Strategy Cards that reproduce historical characters (plus some generic ones), each with designed abilities that affect game rules. The game manages also the aging of Monarchs, that are substituted by new kings, crowned after their predecessor is dead, so allowing players to handle a line of succession in the monarchy of their Powers.

Strategy Cards are the core of the game, they provide Command Points that allow players to perform all Game Actions, but they also introduce the most outstanding historical events of the Modern Age, such as the Protestant Reform and the Wars of Religion, the birth of Holland (United Provinces) and the Eighty Years war with Spain, the rise and decline of the Portuguese and Spanish colonial Empires, the Thirty Years War, the rush of the Russian Empire to Siberia and the Great Northern Wars, the growth of the Ottoman Empire and the wars with Christianity, the Wars of Succession, the birth of USA, etc. etc.

Game Actions allow players to perform activities in all matters, just to summarize some:

Warfare: the game has a light military system, players can rapidly move or redeploy forces, engage land battles, resolve sieges and naval combats. Supply mechanics are really simple. Leaders play a fundamental role in game-play, either as Generals, Admirals or Conquistadors.
Diplomacy: many Minor Nations are present in the game, all players can influence these Minors to get Alliances and Vassals, so benefiting the military support of them during conflicts.
Exploration, Colonization and Trade: the game recreates the race of Powers to build Colonial Empires all over the world. New colonies bring income from the exploitation of exotic resources and gold. The game allows player also to affect the price of exotic goods in order to speculate on price fluctuations. Also, gold can have a strong impact on European economy because of Inflation!
Economy: players must pay attention to the budget of their Powers. At the end of each turn, players perform some short and rapid calculations to determine the budget balance of their Monarchies, based on revenues (taxes, colonial incomes, trade) and costs (maintenance of forces). The game has also the concept of Prosperity, measuring the richness of each Power, strongly affected by the length and outcome of wars.