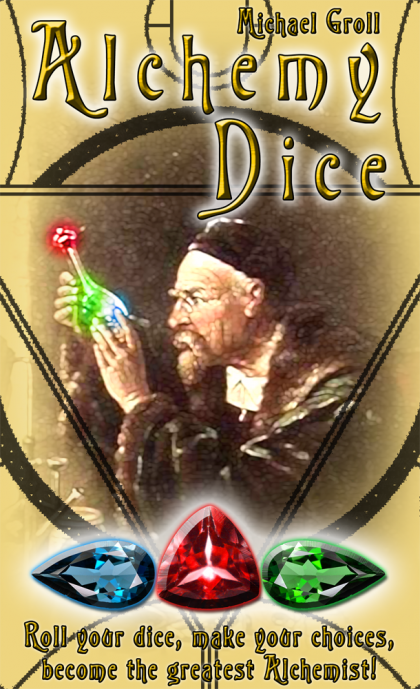 Alchemy dice is a strategic dice allocation/worker placement game in which the players will use their dice to collect precious stones as resources for their alchemical studies, increase their influence by buying new cards and dice and finally earn victory points to win the game.

"The Patriarch of Rishadan was an impressive man who had used his secret knowledge to prolong his life well beyond his natural span. But in the end even he could not escape the last voyage and now the alchemist guild is without a leader.
A council of 111 alchemists has chosen the few who are deemed worthy enough to become the new patriarch and the most powerful man in the whole city. But which one is the best? Which one knows the secrets of the transmutation like no other? Which one can use his influence in the city best to strengthen his position? And which one will be triumphant in the secret rituals known as “chucking the dice”?
Let the competition begin and the council will elect the most successful alchemist as the new patriarch."

In Alchemy Dice, the player start out with three different cards, three dice, an unique Character and an unique assortment of resources. During each round the players are rolling their dice and allocate them to their cards where they, based on the dice-roll will be able to use different actions - like collecting resources, modifying another die, tranforming one kind of resource into another one and so on.
During the later phases of the game each player can use the collected resources to buy a new card and/or die which will improve his abilities during future rounds.

The game can end in several ways (e.g. if all dice from 2 of the 4 dice markets have been bought, the last card from the deck has been drawn or one player has bought 8 cards) and the player with the most victory points (granted by the cards and through bonus conditions) wins the game.

Currently there are 2 versions of the game which will both be available through the Gamecrafter later this year:

The Deluxe version:
This version includes all the cards and all the other components needed to play the game. The resource tokens are glass beads and the game comes with cloth bags to store all the dice and gems for a high production quality version of the game.

The Redux version:
This is the version for the gamer on a small budget but with plenty of spare parts at home. The redux version comes in a small tuck-box and contains only the 56 cards and the rules. In order to play with this version who will have to provide your own dice, gems and markers. But as most people will have these things at hand already the redux version offers a very affordable way to get Alchemy Dice.