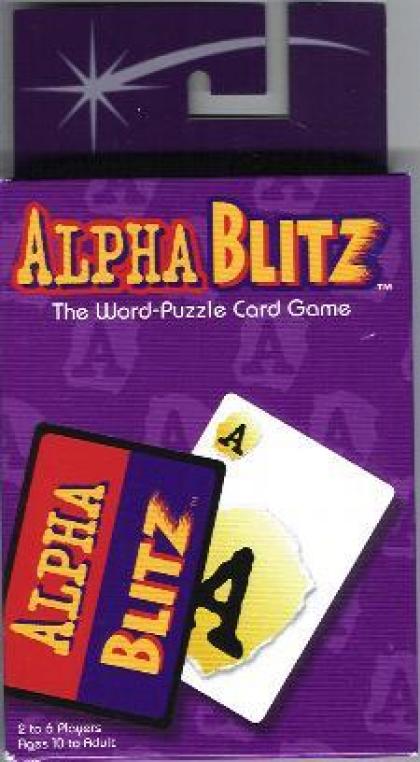 Alpha is a word game for 2 players. there are 98 cards with letters on them and 10 blitz cards showing a lightning bolts. These are shuffled together and six are laid out between the players. Each player gets 3 cards in their start hand. On your turn you try to make the longest word possible with the six letters showing on the table using each letter as many times as you want. For example you could make the word letters with the letters L, E, T, R, and S showing. Each turn you must cover one letter with a card from your hand and then draw another card. You may do this before or after you make a word. If you cover a letter with a blitz card that pile is permanently out so as the game progresses there are less letters to use. You receive 1 point for making a word. 1 point for every letter in the word more then the number of letter piles. You also get 1 point for each J, K, Qu, X and Z you use. The game ends when there are only 2 letter piles left.

Blitz is a word game for 3-6 players. Each player has a hand of 3 cards. 2 cards are placed face down in front of each player. All cards are turned up at the same time. The first player to call out a word that can be formed with the letters showing gets 1 point plus 1 point for each J, K, Qu, X and Z they used. The second player to call out a word gets 2 points but the word must be longer then the previous word. This continues until all players have called out a word or passed due to not seeing a legal word. Each round is started by covering a letter from your hand. The game ends when one player has both letter piles covered with a blitz card.

Alpha Blitz was awarded the title "Best Word Game" by Games Magazine in 1999.