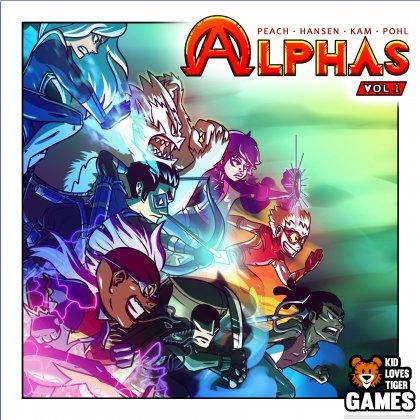 &quot;Page 1, Byline of the Titan Front Newspaper. Submitted by H. Harvey Harris, Editor and Chief&#10;&#10;Alphas. That's what the government called all these super power freaks. On this day, our city, our beloved Titan City, is crawling with these menaces! Each one, with their own agenda and their own way of possibly terrorizing the good people of the earth's mightiest city. But this editor in chief of yours will not simply sit idly, letting these vigilantes take the law into their own hands without being held accountable. I will be reporting daily from the front lines so stay tuned!&quot;&#10;&#10;The Titan Front Newspaper. Read by the entire city. For years it has painted the picture of Alphas being with its editor and chief as the main sounding board. The truth is, some Alphas are bad. Some use their powers for their own personal gain, or &quot;just to see the world burn&quot; as they say. Some just want to keep to themselves or... save themselves.&#10;&#10;Some though... some hear the calling. Some believe that their abilities have with them, the responsibility to make the world a better place. A safer place.&#10;&#10;Welcome to the world of Alphas, a world where the super powered are a regular sight.&#10;&#10;Alphas is a super hero miniatures game for 2 to 4 players! The game uses a unique combat dice grading system paired with an Activation Deck System. Players can play the game 3 different ways!&#10;&#10;Story Mode: Story mode takes the players through the graphic novel styled story, with a powerful narrative and an evolving story novel to novel. This mode will appeal to families and game groups alike as it can be played cooperatively!&#10;&#10;&quot;Head to Head&quot; Mode: This mode involves building a team of Alphas and squaring off against 1-3 other teams of Alphas in a random 1 of 6 different objective based missions! This mode will appeal to any who like playing tactical competitive games, and will be supported with organized play after its release.&#10;&#10;&quot;One Shot&quot; Mode: These modes will be expansions in the future that feature smaller story arcs for players to play through. The first of which will be &quot;Alpha Hunters&quot;, a story where a shadow government group and it's giant mechanized creations hunt the Alphas, hurting cities and civilians in the process. These too can be played cooperatively, and yet... also competitively, because who would we be if we didn't let you play as the giant &quot;miniature&quot; Alpha Hunter Robots?!&#10;&#10;&mdash;description from the publisher&#10;&#10;