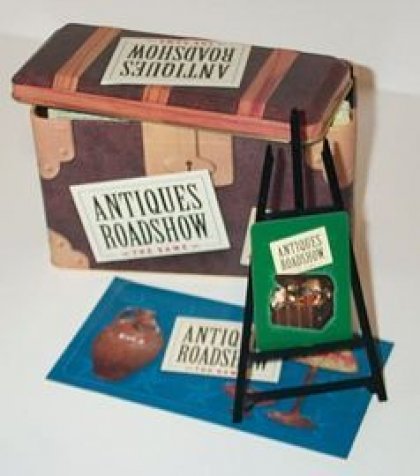 Each player is given a hand with 2 different types of cards-10 value cards with different dollar values (including a &quot;reproduction&quot; or $0 card) that will be the same for all players and 3 Antique Speak cards, which have words used in the antique business and are dealt randomly from a deck of 32 different cards. The object of the game is to get rid of all the cards in your hand.&#10;&#10;Each player is also given a number of antique cards, with an item pictured, which will be used to drive the game play.&#10;&#10;On each player's turn, an antique card is selected. Each player will then choose a value card from his hand to correspond to the value the player thinks the antique is worth and places it in front of him. Once that is done, the player whose turn it is reads two stories that are printed on the back of the card. One is true, the other false. As the stories are read, if a term is used that is listed on an Antique Speak card held by a player, that player can discard that card as well as any value card that is still in his hand.&#10;&#10;After the stories are read, all the players except the one who read the stories will vote on which story they think is true. The true story and actual appraised value are then revealed. All players who guessed the correct value can discard the value card they used for their guess. All players who guessed the correct story can discard any value card, including the one used to guess the value on this turn (if they guessed the value wrong.)&#10;&#10;As soon as a player is out of cards at the end of a turn, the game ends.&#10;&#10;