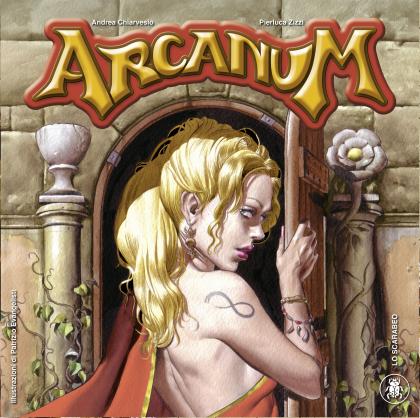 Arcanum is played with a regular Tarot deck, used to move the game pieces on the board. There are four noble Houses, fighting for power and supremacy in a medieval city. They are named after the four Tarot suits: Pentacles, Chalices, Swords and Wands. Players will represent different paths for Fate, and will try to shape the destiny of those Houses to best suit their goals.

The game is played over 6 or 9 turns, and at every turn each player has the opportunity to hide one (and sometimes more) cards under the board in front of him (this is called "influencing" the Houses and it's like a hidden bet on the house, trying to get control over it) and to play cards for their effects (Major Arcana cannot be hidden but have stronger effects). Playing cards will impact, among other things, the ranking of the Houses in terms of prestige. To optimize point scoring, a good player will try to gain influence over "winning" houses without wasting too many cards for acheiving that, and/or to influence Houses in the lower positions with little effort. Experienced players will learn how to deceive their opponents about their real intentions.

Skill, bluffing, intuition and reading your opponent’s moves are all skills required to gain victory.

Arcanum is the first board game by the world acclaimed Tarot publisher Lo Scarabeo, and includes a complete tarot deck: a "family friendly" version of the Initiatory Tarot of the Golden Dawn featuring wondrous illustrations by the artist Patrizio Evangelisti.