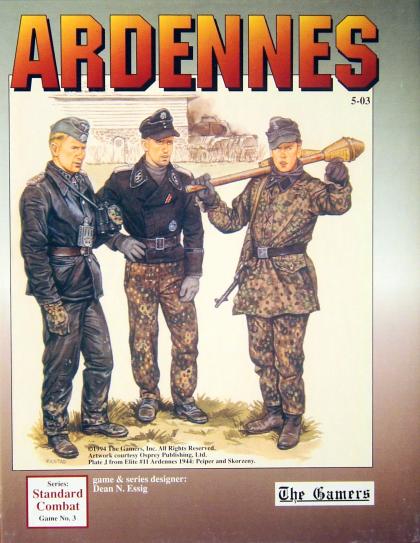 Ardennes - The Ardennes Offensive, December 1944, is game 3 in the Standard Combat Series by The Gamers. This game covers the German attack in the Ardennes in 1944, better known as the Battle of the Bulge.

Dec. 16, 1944: Along 50 miles of front in Belgium, the German Wehrmacht shatters the stillness of the morning as it begins its last great offensive in the West. More than 1,000 tanks and 200,000 men are available to break through the thinly held American line. It is Hitler's last desperate bid to change the course of the war.

Ardennes is a game of this classic engagement, the Battle of the Bulge. It features all the color you'd expect from a study of this topic: against-all-odds American defenses, slashing Panzer assaults, dramatic bridge crossings, Nebelwerfers, para-drops, commandos and more -- but in a crisp, fast, fun game of the most popular battle in U.S. World War II history.