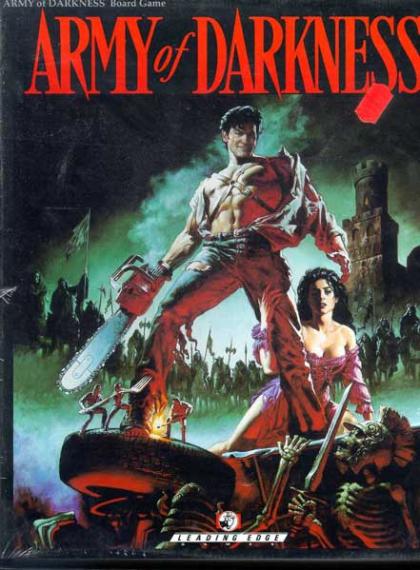 Army of Darkness recreates the battle for Arthur's Castle at the end of the film, as the Deadites swarm over the walls in their attempt to capture the Book of the Dead. The players take the roles of some of the important characters from the film (Ash, Henry, etc.) and try to defeat Evil Ash and his horde of Deadites. The game can be played cooperatively where the evil forces are controlled by predetermined objectives, or instead one of the players can control all of the evil forces. Game play consists of players searching the castle for allies and equipment they can use to fight the Deadites (flaming arrows, explosives, etc.) and the actual combating of the evil army. Players win if they defeat the four evil champions. Evil wins if Evil Ash gets the Book of the Dead out of the castle or if the Deadite army kills all of the players.