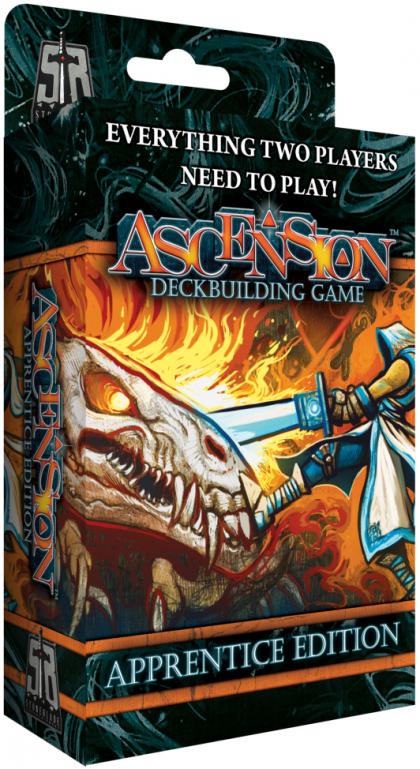 Ascension: Apprentice Edition is a 110-card set designed to be an introductory experience for two players to the Ascension deck-building game. All the cards in Ascension: Apprentice Edition feature new frames to assist players in telling the Heroes apart from the Constructs. The card borders are colored differently for the starting deck, the center deck, and "always available" cards to make sorting easier at the end of the game. The set also includes new art for many cards, as well as retouched versions of old favorites.

Ascension is a deck-building game in which players spend Runes to acquire more powerful cards for their deck, while spending Power to defeat monsters and gain Honor. Gameplay is similar to other deck-building games, with the player adding cards to his deck by purchasing them from a central deck, which has the top six cards revealed and available for purchase. When cards are removed, they are replaced with a new one from the top of the deck. Victory points are earned in three ways: first, each card purchased is worth one or more victory points; second, victory points can be gained by defeating monsters with a power resource featured on several of the cards; and third, some cards give victory points directly each time they are played.