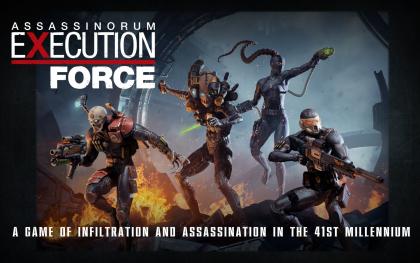 Assassinorum: Execution Force gives four Imperial Assassins an incredibly important mission - slay Chaos Lord Drask before his dark ritual brings about the end of the Imperium itself! A fast-paced co-operative game for one to four players, it blends stealth, tactics, subtle forward-thinking and outright blazing violence into a fantastic, tense, action-packed experience that is accessible to board game players of any level.
It contains everything you need to play to defeat the Chaos Space Marines Sorcerer.

Included in the box are four beautiful, exclusive Imperial Assassin miniatures - the Vindicare Assassin, armed with an Exitus Rifle and pistol, clad in a stealth suit; the Callidus Assassin, wielding a C’tan Phase sword, neural shredder and poison blades; the Eversor Assassin, with Executioner pistol and Neuro Gauntlet and the Culexus Assassin, with his psyk-out grenades. On top of these, you get fifteen Chaos Cultists, three Chaos Space Marines, a Chaos Familiar and a Chaos Space Marine Terminator Sorcerer.

On top of these incredible miniatures, there’s a set of detailed board tiles on heavy card stock, a deck of Event Cards, counters for various events in different shapes, sizes and designs and included dice.