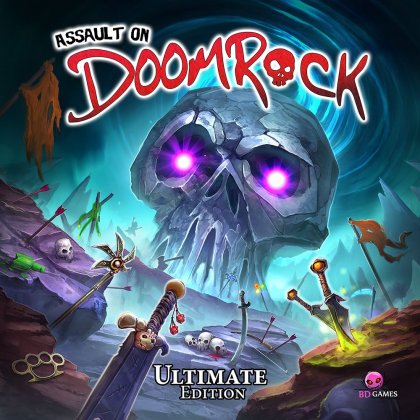 A complete and updated version of the cooperative fantasy board game, where you can die from an arrow in the knee, poor decisions and dry jokes.&#10;&#10;A three-act fantasy adventure campaign featuring exploration and combat, now with v4.0 rules, numerous enhancements and improvements, integrated expansions and twice the amount of content released for the game previously.&#10;&#10;While exploration is focused on creating meaningful decisions with impactful results, combat in Doomrock is highly tactical and aims to be fair by introducing a minimum amount of output randomness and rewarding experienced play; all while giving a hardcore challange.&#10;&#10;Main features:&#10;&#10; Focus on replayability, with scenarios in the spirit of rogue-like games, generated from a massive amount of cards&#10; A distinct, gridless battle system utilizing dice-allocation mechanics and encounters powered by highly-thematic A.I.&#10; Power up between encounters by exploring a randomly-generated world and resolving quests, triggering events, and scoring epic gear and new abilities that bring unexpected synergies between heroes.&#10;&#10;&#10;&mdash;description from the publisher&#10;&#10;