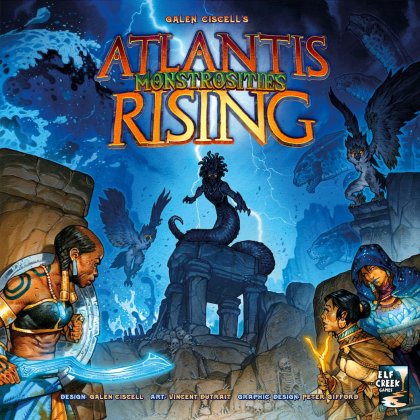 The gods will spare no effort to destroy Atlantis. From the hidden depths of the world they have called forth unspeakable terrors, monsters sent to destroy, frighten, and harry the Atlantean effort to save their civilization. But hope is not lost. On Atlantis, as new leaders rise up to answer the challenge, new powers also emerge to save the isle. And the gods have summoned a power even they cannot control, for some of these creatures are more sympathetic to Atlantis than to the cruel and petty gods.&#10;&#10;Atlantis Rising: Monstrosities is an expansion for Atlantis Rising (Second Edition) that offers these new challenges:&#10;&#10;&bull; Medusa Unleashed, in which the gorgon Medusa turns Atlanteans to stone. Can you break her curse and recruit her to your side?&#10; &bull; The Harpies&rsquo;s Lair, in which three monstrous, birdlike creatures steal the resources and workers you need to build the Cosmic Gate. Can you defeat the Harpies and win back the treasures found in their lair?&#10; &bull; [redacted] to be revealed during the Kickstarter&#10;&#10;Four new mechanisms are introduced to the game:&#10;&#10;&bull; Monsters&#10; &bull; Allies&#10; &bull; Magic Items&#10; &bull; Locations&#10;&#10;-description from publisher&#10;&#10;