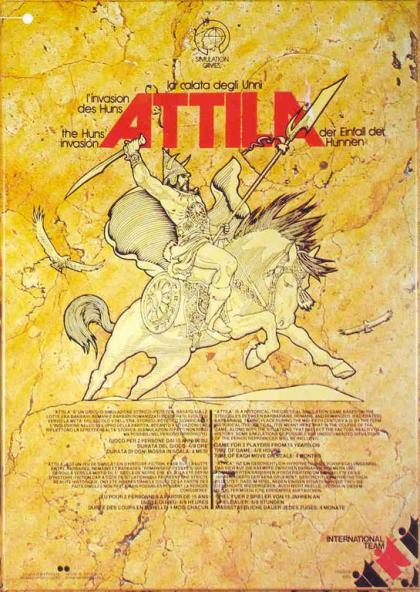 This is the hypothetical invasion on the Roman Empires of both the east and west, on the part of the hordes of the Huns.

Two elements essential to the game are the policy of alliances with other barbaric peoples (along with the activities of Pope Leo) and the calculation of cultivatable land devastated by the hordes of “Flagellum Dei”
Degree of difficulty: 2/6

Pieces representing the barbarian hordes and the roman legions of the eastern and western empires.
6 heavy cards to be used to establish the outcome of combat.
6 heavy cards to be used to resolve diplomatic conflicts.
Combat and diplomacy tables.
Calendar with entries and deaths of various leaders and emperors subdivided into seasons.
Board in rigid, thick cardboard with a matte plastic finish, cut into 5 pieces.
Rule booklet in 4 languages with examples.
Plastic storage tray and one die.