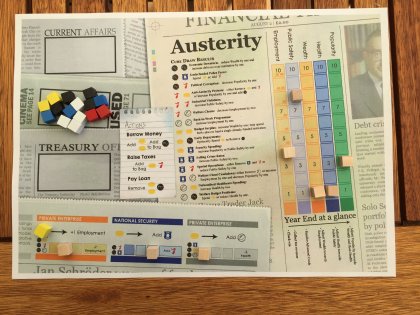 Austerity is a compact solo game in which you run a nation struggling under the burden of international debt - make decisions about police funding, investment in private enterprise, whether to crack down on welfare cheats and when best to borrow more money... but if you don't escape debt before your bad decisions catch up to you, you'll be out of office and out on the street with the rest of them!&#10;&#10;The state of the nation's finances are represented by a number of coloured cubes in a bag; these are drawn in pairs, and each pair corresponds to a different event that occurs - and which often ask the player to make a decision. The player adds cubes to the bag by choosing to fund different public institutions, borrow even more money or raise taxes, meaning that the player decides how the nation's money is spent, but doesn't directly choose the effects that spending has on the country.&#10;&#10;