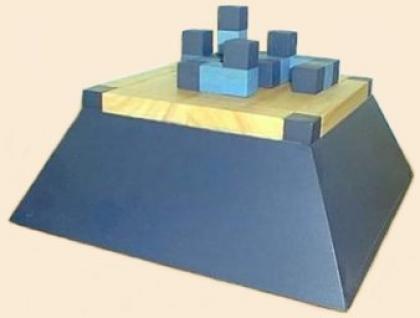 Two builders have met at the sacred ground to build the giant temple. In the middle of the jungle, they find only a single pyramid stump. The architects place 22 identical pieces to try to get the best score. However at this place is Ah Puch, the god of death and destruction. Ah Puch tries to disrupt construction as much as he can.

On a turn, you must place one of the identical pieces which twist in three dimensions. The object is to place blocks at the third level on two sides of the structure. Any part of a piece may never rise above the third level. This makes the game feel like you are assembling a giant 3D jigsaw puzzle. The 3rd player takes on the role of Ah Puch, the destructive god. Ah Puch tries to keep the other two players from making a high score.

The box/game board is a large, truncated pyramid in blue with finished wooden top. The blocks are painted in slightly varying shades of deep blue.

Re-released in 1997 by the same publisher, winning a special Spiel des Jahres award for its appearance in that year.