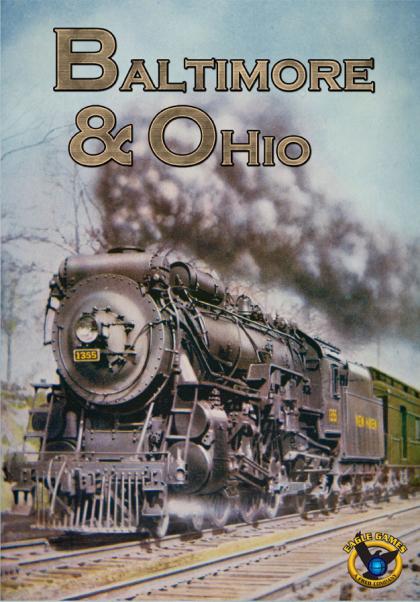 With a bright Peep from the whistle, a full Chuff from the pistons and a powerful Clank from the drivers, America's first steam locomotive moves down the steel rails of the Baltimore & Ohio Railroad in Baltimore in 1830. This strategic railroad game extends from the first of America's railroads through the golden age of steam, where pioneering rail barons knit together the fledgling United States with iron roads, realizing the full power of the nation's mighty heartland. Each player takes the roles of railroad presidents and their wealthy investors, betting that their capital gambles will pay off handsomely. Baltimore and Ohio is not a game of luck or chance, but a competitive struggle of wits, savvy and guile. With the resources at hand, should you focus on further expansion, technological breakthroughs or emerging markets? This modern classic has all the challenges faced by the empire building capitalists that created a superpower.

Eddie Robbins' Baltimore & Ohio is a no luck, no auctions, 3+ hour, grand strategic economic slugfest of a train game, for 3-6 players. It was part of the Winsome Games' 2009 Essen Set, has been licensed to Eagle Games and will be released by Eagle in 2010.