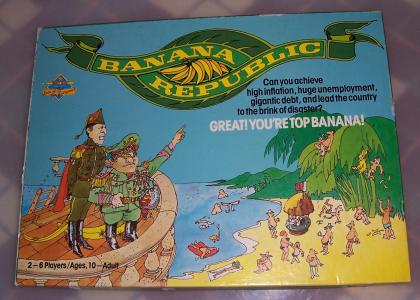 "Can you achieve high inflation, huge unemployment, gigantic debt, and lead the country to the brink of disaster? Great! You're Top Banana!"
In Banana Republic, players attempt to outdo each other in controlling banana republics. The object is twofold: 1. to create the worst governed nation, and 2. become the richest player (in bananas!).
The entire game is themed around everything related to bananas. Players moving around the banana-shaped board may take "banana chance" cards (gaining or losing bananas), answer banana-related trivia questions, choose 'Economy Cards' and bet bananas on their chance of having the worst economic performance in a chosen area (such as inflation, unemployment, etc), bet bananas on having the worst banana republican leader (eg worst Treasurer, worst General) by allotted scores (in order to collect a set of government cards), land on a 5-banana "Bananza", lose bananas in the banana bank, and withdraw other players' bananas from the bank.
The winner (Top Banana) is the player who banana bankrupts all other players.

NB: Although the playing time is stated as 10 minutes, it can often last several hours.