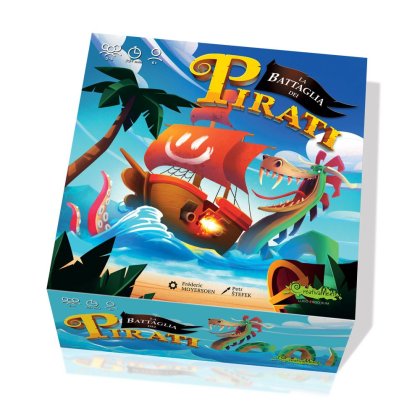 You are about to start an exciting battle. Load the cannons and draw your swords! To hit the enemy galleons and to hit the enemy ports use skill and tactics&hellip; and have a little luck too!&#10;Who will manage to become the king of the seven seas?&#10;Load up your wooden cannon and aim it at enemy ships. Take good aim because next turn you will have to dodge their cannon fire.&#10;Plan your moves carefully and move your galleons around the playing field: whether it's a table or the floor, there are no limits to your movements!&#10;The game ends when a player is eliminated, ie a&#10;say when he lost all his galleons and his tower.&#10;The other players count their own trophies. Each galleon won like trophy is worth 1 point, while each conquered tower is worth 2 points.&#10;Whoever has the highest score wins the game and, in case of a tie, who conquered the largest number of towers.&#10;And if you want a little more challenge, there are 6 additional scenarios to make your battles even more memorable.&#10;&#10;