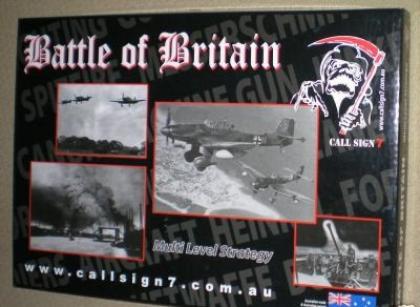 The Battle of Britain was the German attempt to gain air supremacy before launching their planned invasion of Britain - "OPERATION SEA LION".

In Call Sign 7's Battle of Britain game you can play as either side in this crucial conflict, and see how things may have gone differently if you had been there. Commanding your aircraft on the unique multi-tiered combat arena you can choose to:-

Represent England
Will you defend your country at all costs during this desperate time? Succeed and you will deliver Hitler his first major defeat, paving the way to the D-Day invasion and the destruction of the Thousand Year Reich.

Represent Germany
Follow the orders issued by Reichmarshall Hermann Goering on the 30th of June 1940 and destroy the Royal Air Force! After all, the odds are in your favour 3 to 1. Can you change history and do your countrymen proud? Clear the skies of the British pest and open the door for the coming invasion. Word has it, this time next year you'll be holidaying on the very ground you fought over (with the added bonus of promotion).