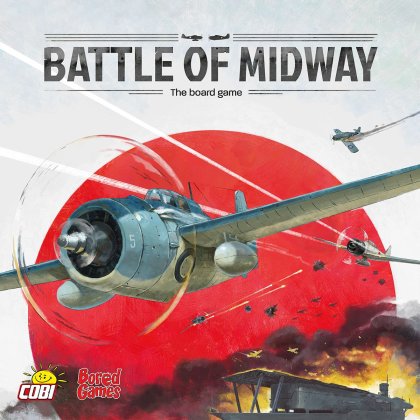 In Battle for Midway players will have the opportunity to take on the role of an American or Japanese air force commander and become a participant in the famous Battle of Midway of 1942, which decided the fate of the war in the Pacific. The game is for two players and its duration depends on the adopted Game Mode.&#10;&#10;The war game with COBI bricks combines strategy requiring planning with random elements. The pawns are mini models of block planes on special bases. Every player will easily master extremely simple game rules based on clear icons. The set includes a box, a game board consisting of seven large and two small pieces, 12 airplanes on special stands, action cards, tokens and markers. The included sticker sheet lets players personalize their planes!&#10;&#10;Perfectly balanced tactical and random elements make the gameplay exciting every time. Players of all ages can easily duel with each other! Devise clever strategies or let your luck run wild! Feel the atmosphere of the Second World War clash thanks to the amazing graphics. Lead your air fleet to victory!&#10;&#10;&mdash;description from the publisher&#10;&#10;