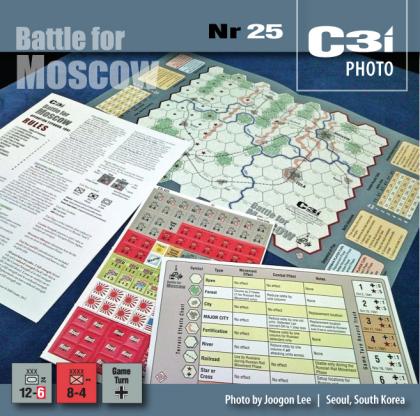 In September of 1941, the German High Command decided to launch a final, decisive offensive to crown their invasion of Russia, capture Moscow, and break the Red Army once and for all. Codenamed Operation Typhoon, German tanks and infantry pressed relentlessly forward until they could see the very spires of the Kremlin. As Russia’s communist government was burning secret papers and evacuating Lenin’s corpse eastward out of their ancient capital, Moscow was hanging in the balance. By 5 December, the Germans were halted along the entire front -- exhausted and demoralized, having barely failed to capture their objective as the winter freeze grew ever colder.

Battle for Moscow is another in the popular series of classic introductory wargames from Victory Point Games offering new players something extra: a Battlesson(TM). Relive this dramatic campaign on the Eastern Front of World War 2 while learning more about the fascinating hobby of wargaming, where you hold command as history holds its breath.

Solitaire Suitability: 8 on a 9 scale

Scale: Each unit is one German corps or Russian army, and each turn is approximately one to two weeks.