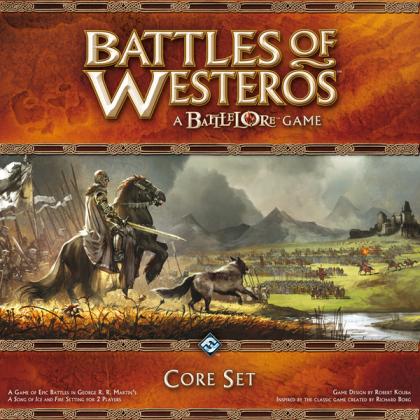 Unfurl the banners of the Great Houses of Westeros! To secure power in the Seven Kingdoms and to ensure the survival of their lines, the Houses of Westeros each follow very different paths. Some forge strategic alliances, some create complex political intrigues, and still others use deceit and betrayal. But there is no more direct or lasting path to power than taking to the field of battle.

In Battles of Westeros, two players recreate the military conflicts set in George R.R. Martin’s A Song of Ice and Fire series, taking part in battles directly from the books... or designing their own. In this epic board game of battlefield tactics, players control either House Stark, the wards of Winterfell who have called their hearty allies to defend their honor and lands, or House Lannister, an aggressive force funded by Casterly Rock’s endless supply of gold.

Battles of Westeros is played over one of several included scenarios, called battles. Each of these has a battle plan that dictates the formation of the map (called the battlefield), starting positions of each House’s units, starting resources, special rules, and victory conditions for the game session. A battle is played over several rounds, with each round consisting of alternating player turns. The goals a player needs to accomplish to win a game of Battles of Westeros can vary (some battles require players to earn a certain number of victory points, while other battles require a player to take and hold strategic positions on the battlefield), but this collection of available scenarios, along with the ability to make your own exciting battles with the double-sided map board and over thirty map overlays, gives Battles of Westeros a wealth of replayability!

Battles of Westeros also offers plenty of strategic complexity, resulting in a satisfying number of compelling choices in every game. For example, each player has a special randomized Leadership Deck, consisting of unique tactics and abilities; this deck will change based on the scenario being played and characters present. Is Jaime Lannister on the battlefield? If you draw the appropriate Leadership Card, he can order nearby troops to aggressively rush their opponents! Is Eddard Stark guiding his forces into battle? Special flanking maneuvers enter your Leadership Deck, to potentially be drawn into your hand.

Battles of Westeros also features a level of realism that immerses you in the most significant conflicts of the War of the Five Kings. Each plastic figure base, which holds your infantry, archer, cavalry, and kennelmaster units, has a slot for a banner pole – a small flag-bearing attachment. The plastic banners that attach to each unit bear the crest of that unit’s house, and their orientation on the pole indicates at a glance whether that unit has been ordered yet. In addition to the intuitive and useful game effect this provides (differentiating the units you’ve activated from those you haven’t), the sight of your army’s banners spread impressively across the gorgeously designed game board will give you the sense that you are the clever Tywin Lannister, Lord of Casterly Rock... or the stoic Robb Stark, with his direwolf Grey Wind at his side!