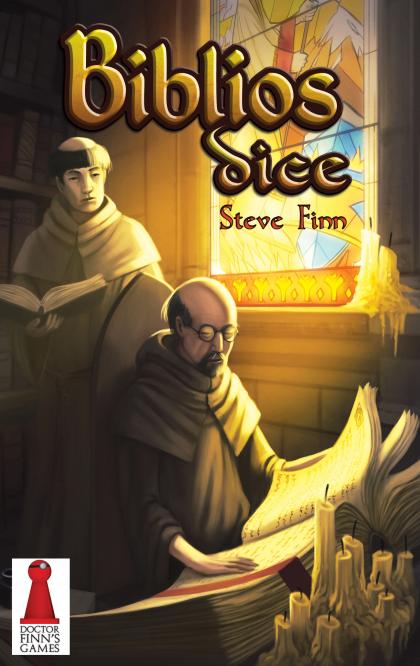 As a medieval monk, you are charged with increasing the prestige of the abbey's collection of historical and sacred texts. By acquiring the resources for manuscript illustration and reproduction, your abbey produces and sells its valuable works, thereby bringing in finances necessary for maintaining a fine abbey. Will you succeed in making your abbey the most prestigious of all?

The object is to acquire gold and to collect resources – scrolls, manuscripts, pigments, quills, ink – to exchange for gold. The follows the same basic theme as Biblios, but with interesting changes due to the use of dice. As in Scripts and Scribes, players compete in five different categories and the values of the categories change during the game. In addition, depending upon the dice roll, there may be many or few auctions during the game in which players auction their resources for gold or auction gold for resources.

Biblios Dice differs from its earlier version Scripts and Scribes: The Dice Game in a few important ways. Regarding the production and components, Biblios Dice has much nicer artwork, the game board has been divided into separate boards, and the resource dice are etched. Regarding the rules, Biblios Dice has a few important changes. The goal of the game is now to collect the most VPs, rather than gold. There is only one type of auction in this game and the first and second place winners of the auction get dice (not winner take all). The auctions also do not happen as randomly, but can be predicted based upon the progress of the mule on the market board.