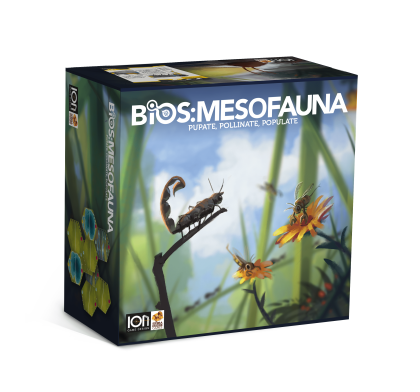 Bios:Mesofauna is an alternative Bios:Megafauna. That is, it starts and ends at the same time. It follows the same sort of Achterbahn environment, same climate change, same or similar creeples, same VP, same tiles, same card colors, same cratons and drift, same basic and Achterbahn games, same catastrophes, same greenhouse, cloudiness, and oxygen. Same terrestrial settings. The setting is the same, only the animals are smaller.&#10;&#10;Bios:Mesofauna is a deliberate attempt to reach a wider audience than Bios:Megafauna, by stripping away about half the rules. Monsters, tools, horror plants, kiwi, haustorium, dark heart, Mars, Venus, shelves, blooms, Offshore, and Cheshire Cat have been dropped. More significantly, marine variant and size were also dropped, and these two decisions are worthy of more discussion.&#10;&#10;The two games integrate with each other making it possible to play a game with a combination of player roles from the two games.&#10;&#10;&mdash;description from the designer&#10;&#10;