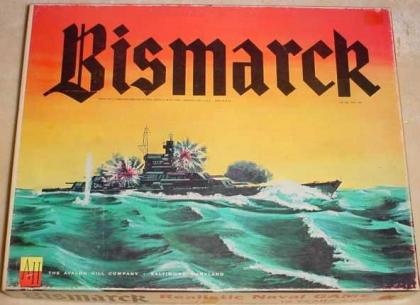 Hunt down and sink the Bismarck. Three levels of play. In the advanced game, you use miniatures rules for the combat. Hidden movement by the use of separate search boards.

The original Bismarck game from AH was remarkable for one reason: the ONLY playing piece that the German player had was the Bismarck!

A straight forward move-and-search naval game. If the British player finds the Bismarck, a battle ensues.

The game is played for points. The player with the most points at the end of the game wins. The game ends when: 1) the Bismarck is sunk, 2) the Bismarck enters Bergen, St. Nazaire, or Ferrol after patrolling, 3) the German gains so many points it is impossible for the British player to win, or 4) time runs out.