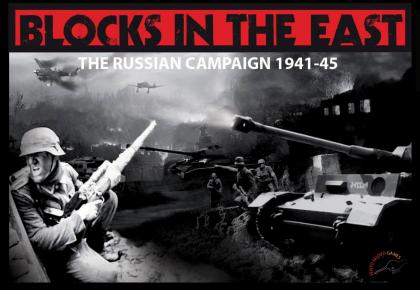 Blocks in the East

BLOCKS IN THE EAST is a game of World War II conflict simulation at the strategic level. It recalls the most decisive battles fought on the Eastern Front from the beginning of the invasion in summer 1941 until the dramatic end in Berlin in spring 1945. Although based on historical events and battles, the players in command of the two factions can modify the evolution of World War II.

Developed with a system of wooden blocks and cubes and played out over an astonishing 125x87 cm (49"x34") full laminated multicolor mapboard, the only paper component in the box is the rules manual. In total, more than 600 wooden/plastic components have been created by the best Italian artisinal industry and painted "A buratto", a technique usually adopted for painting car parts and accessories.

The rules are divided into three major sections which can be learned one at a time:
• The Basic Game Rules introduce the basic concepts of BITE and enable players to start playing the game without too many rules to remember.
• The Advanced Game Rules provide more specific and detailed rules for enhanced realism, such as the use of Fuel and the Advanced Production System.
• The Optional Rules are for those who want to get the most out of the game, with rules for Technology Research, Strategic Warfare with the bombing of Germany and U-boat campaigns in the oceans, Amphibious Landings, Airborne Assaults, and more.

In BLOCKS IN THE EAST, a hexagon is approximately 53 miles (70 km) across, a turn is 1 month long, and a full-strength counter represents a major military formation (normally corps size) with 300 planes, 300 tanks, or 30,000 men, depending on the unit type, equipment, nationality, etc. The game can be played with "Fog of War" on (with the faces of wooden blocks hidden from the opponent) or off (all units are visible).

Players can compete in the full 1941 Codeword Dortmund Campaign, in one of four six-turn scenarios ("Operation Barbarossa 1941", "Case Blue - The Drive to Baku 1942", "Operation Citadel - The Battle of Kursk 1943" and "Bagration Offensive in Summer 1944"), or one of the shorter, easy-to-learn scenarios ("Road to Rostov", which lasts six turns, or any of these scenarios: "Road to Leningrad", "Road to Moscow" or "Short Barbarossa"). Each scenario has different victory conditions and length, with a playing time from 1 to 49 turns.

BLOCKS IN THE EAST can be played standalone or combined with Blocks in the West and Blocks in Afrika.