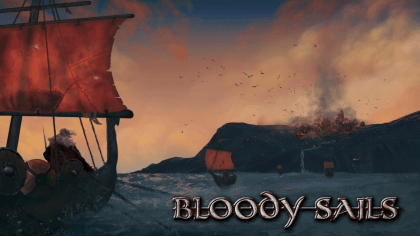 Bloody Sails is a management/strategy board game, inspired by the 4X genre. It's set in a fictional X/XI century Scandinavia, in which Norse kingdoms compete for power, while threatening the nearby foreign kingdoms with raids and pillages.&#10;&#10;The player takes the role of one of the Norse monarchs in the game, each with unique objectives, heroes, blessings and development trees, and leads his/her kingdom in a timespan of 20 to 40 years. Each year constitutes a game round, divided in 4 seasons, in which players may take action. Players will have to gather resources, improve their cities and tribe, explore the seas, build armies and fight against other Viking and Christian empires, to ultimately reach their fate and triumph over their opponents.&#10;&#10;Battles are based on hero, unit and combat cards. Units and modifiers enhance the strength of combat cards, that are then played from the hand in succession until a contender wins. Heroes serve as generals, giving the owner unique skills and better combat cards. Fighting is a key point in the game, since it leads to conquest, plunder and glory.&#10;&#10;Starting from a small coastal village, players will create great overseas domains and lead their people to greatness, developing their nation with the riches their raids and trades will provide. They will command great armies and famed heroes, proving their worth on the battlefield and earning the favor of the gods. They will have to outshine every opponent and take their place in the sagas.&#10;&#10;&mdash;description from the publisher&#10;&#10;