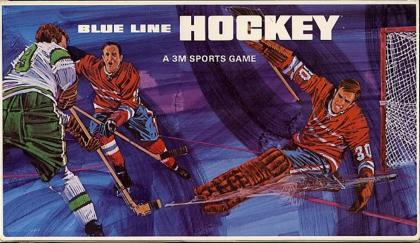 Blue Line Hockey is the hockey simulation board game in the 3M Sports Games line. The board itself is a replica of a hockey rink, and there are pieces for each player on the two teams and even a little hockey puck. The game simulates most aspects of hockey including player movement, passing, stealing, shots-on-goal, and penalties using a combination of dice, cards, and a lookup table. The game lasts for 3 periods and the player with the highest score at the end wins.

º Cards not included in the square-cornered sets.