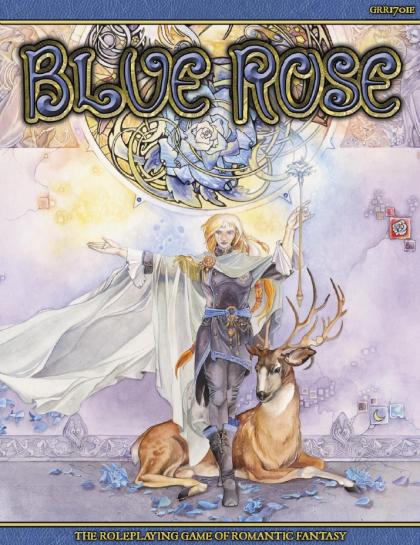 Aldis, the Kingdom of the Blue Rose, shines as a new light following the dark age of the Sorcerer Kings. Now, envoys of the Sovereign's Finest strive to protect Aldis from threats like the Lich Kingdom of Kern and the fanatical Theocracy of Jarzon, as well as monsters and dark magic left over from the Shadow Wars of the Sorcerer Kings. Aided by the rhydan - their psychic animal companions - the champions of the Blue Rose guard the Light against the power of the Shadow. Blue Rose, the Roleplaying Game of Romantic Fantasy, allows you to adventure in the fantastic world of Aldea. Based on the world's most popular roleplaying system, Blue Rose gives you everything you need to play. In this 224 page book you will find:

A streamlined game system, requiring only a single twenty-sided die to resolve any action your heroes may take.
Fast and dramatic action resolution, with systems for everything from fighting to social repartee.
Complete and flexible rules for hero creation, with options to play rhydan (intelligent psychic animals) as well as humans, sea-folk, the night people, or the mystical vata.
A complete system of arcane and psychic powers, from empathy to the darkest depths of sorcery.
A system for defining your hero's light and shadow natures, and using the strength of your hero's conviction to influence the flow of the game.
Narrator advice, and the introductory adventure The Curse of Harmony, everything you need to begin telling your own stories in the magical world of Blue Rose.

The word has gone out, the land of Aldis needs heroes! Will you answer the call? Join the Sovereign's Finest and the Knights of the Blue Rose in safeguarding the kingdom and its people. Swear your allegiance to the Light and to the rightful Sovereign ...

For Aldis, and the Queen!