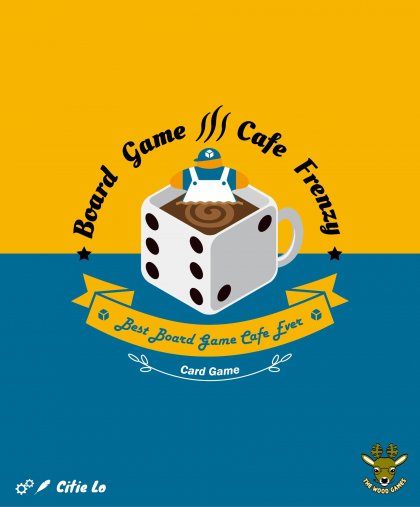 You've opened a new board game caf&eacute; and want to earn as much money as you can &mdash; but others are doing the same thing, so you better figure out how to succeed better than them!&#10;&#10;Board Game Cafe Frenzy is a tactical trick-taking game that consists of two phases, &quot;Preparing&quot; and &quot;Opening the Door&quot;, with each phase lasting ten turns. In the &quot;Preparing&quot; phase, each player buys a card from the market each turn, and cards come in five types: board game, snack, clerk, store, and wi-fi. Each kind of card gives you different items that are important for managing your board game caf&eacute;.&#10;&#10;During each turn of the &quot;Opening the Door&quot; phase, each player plays a card from their hand that they acquired during the first phase; players must play a different color than what's already been played, with higher numbers also being important. Hope that you prepared well! At the end of a turn, each player can use one action disk from their action bar to perform one specific action. After this phase ends, players undergo a final scoring, then add their coins to see who has the most money and has won the game.&#10;&#10;Try to find the right balance between all the elements needed for a caf&eacute;!&#10;&#10;&mdash;description from designer&#10;&#10;