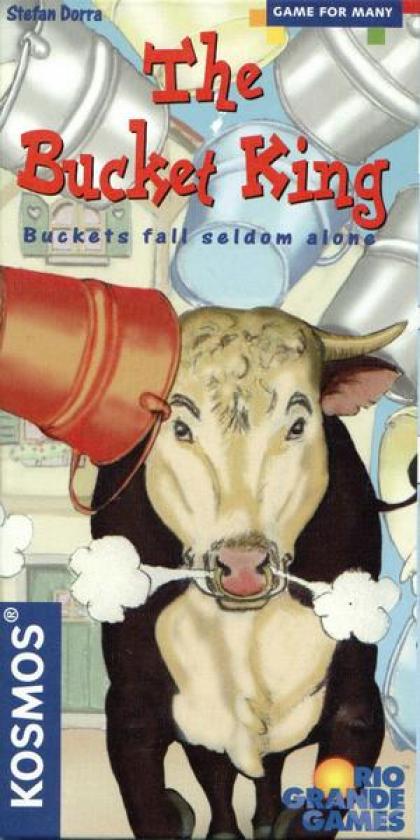 Card game with unusual scoring. Players play sets of animal cards trying to knock over each other's pyramids of buckets. Cards in hand can be used to attack and defend their colour buckets, taking out lower buckets causes cascades.

The deck is five colours (farm animals) numbered 1-8, with two 1s and two 8s. Players start with 12 cards. The start player plays 1-3 cards of one colour, giving a total sum. This total attacks the player to their left, who either plays 1-3 cards of the same colour totalling higher to defend, or loses a bucket. If they do defend though, that total then attacks the player to their left and so on, round the table. If it gets back to the start player, then can add 1-3 more cards to their original play, increasing the total. At some point, a player cannot defend, and buckets go tumbling. If you match the total attacking you this reverses the direction of play, meaning the cards already played are being added to additional cards to create high totals.

Players look at their starting hand before building their pyramid o' buckets, so it pays to put your weak colours at the top.

If you play a cards or cards, you draw back only one card from the draw deck. If you forget, tough! The game ends when a pre-set number of players lose all their buckets, the number increases with the number playing. The player with the most remaining is the winner.

A game comes with enough buckets for 6 players, but you can play with multiple sets to allow larger groups to play. This works well as action down the far end of the table means you are safe, while the reversal mechanism means that there can be a build up of a lead to an unmatchable number before it breaks out of that end of the table.

Seemingly a game of luck, but noticable that the same players keep winning and with experience the winning margins keep getting reduced.