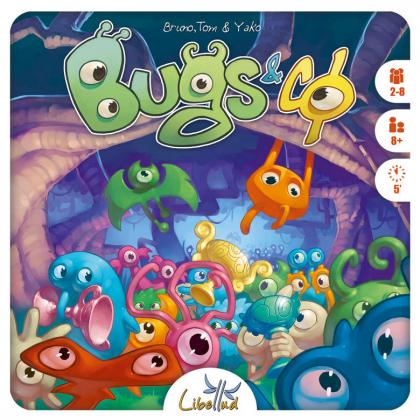 In this game, everyone plays at the same time, and players' speed and memory skills get a thorough workout!

A number of "monster" tiles are spread face down on the table. The aim of the game is to collect as many families of three identical monsters as possible, without being fooled by similar-looking impostors!

When the game starts, each player (using one hand only) must turn over and pick up as many "monster" tiles as possible, one by one. Each tile thus collected is placed face down in the player's other hand. Once a player has placed a tile in their second hand, they cannot look at it again or put it back on the table. Any mistakes will cost you dearly, with penalty points at the end of the game for incomplete and mismatched families.

A limited number of "trophy" tiles are laid out face up alongside the "monster" tiles. Bonus points are awarded for each "trophy" tile at the end of the game. At any time, a player can pick up the highest-value "trophy" tile still available and place it in their other hand. The player must then stop playing. When the last "trophy" tile is taken, all the players who have collected a "trophy" tile and stopped playing start calling out a ten-second countdown. The game ends when the countdown reaches zero and any players without a "trophy" tile must also stop playing.