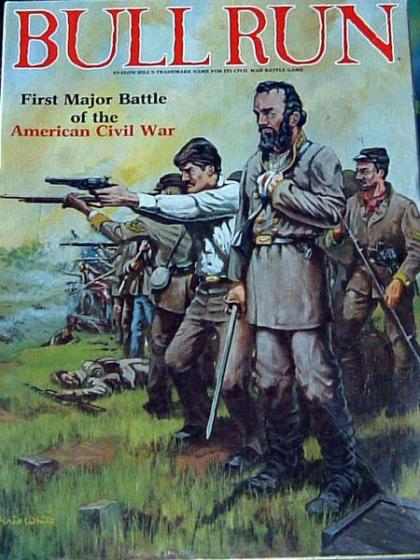 Bull Run is a tactical combat game of the first battle of Bull Run.

The game is played on a map of the area over which the battle was fought overlaid with a hexagonal grid. Units are infantry, cavalry, and artillery, with brigade, division, and army leaders. Each turn is 30 minutes, and each hex represents 1000 ft. Units are basically regiments and batteries. Some infantry regiments with their brigade leader are capable of forming brigades, increasing offensive power at the expense of movement. Batteries can be limbered for increased movement at the expense of firepower, or unlimbered with full firepower and limited movement.

Combat is a modified version of the classic system adopted by the earlier Avalon Hill games. However, rules for leader command activation, infantry screening of artillery, and infantry forming brigades to prevent soak-off attacks, ranged artillery, rally of losses are give the game a unique flavour.

The major terrain obstacle is Bull Run which provides the Confederate with defensive advantages and hinders Union movement.
The game begins with the Union troops approaching partially hidden, unsuspecting Confederate forces. As the Union attack develops, additional Confederate leaders and combat units are activated and are rushed to stem the Union advance. The Union player wins if he is able to capture any of three objective hexes by the end of the game or takes Manassas at any time. The Confederate player wins if he takes Centreville at any time or prevents the Union player from holding any of objective hexes at the game end.