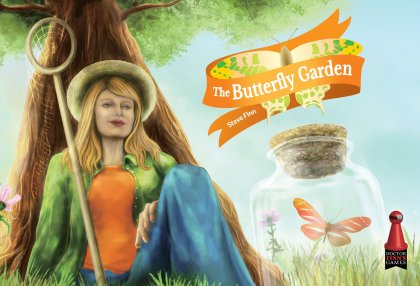 Help save endangered butterflies! Construction projects in your city are disrupting the natural butterfly habitat. Capture butterflies and deliver them to protected butterfly gardens in local zoos, botanical gardens, and museums.&#10;&#10;The game is played in a series of rounds. Players start each round by playing a card from their hands to determine the round's turn order. Cards are numbered from 0 to 59, and lower numbered cards go first. On a turn, a player captures butterflies from the field and adds them to the jar. When possible, players &quot;deliver butterflies&quot; from their jars to the different butterfly gardens to score victory points (VPs). Which butterflies can be delivered is indicated on the face-up &quot;delivery cards&quot; and players are often in a race to deliver butterflies to take the cards and score points. The player with the most VPs at the end of the game wins.&#10;&#10;During the game, players must carefully decide which butterfly cards to play. By playing lowered numbered cards, players not only get a better pick of butterflies in the field, but they also get first chance at delivering butterflies. However, lower numbered butterfly cards usually have fewer butterflies on them, so players cannot add as many to their jars. Also, butterfly cards with special powers usually have high numbers, so you often must sacrifice turn order in order to use one of these special powers.&#10;&#10;In this second edition, the artwork and components have been upgraded. A major rule change is a new set-collection aspect of the delivery cards. There are now 4 types of delivery cards and players score a bonus for having a variety. Also, there are some minor rule changes with scoring butterflies in one's hand and jar at game end. Another small change is in the special powers on some of the cards.&#10; &#10;The maximum number of players in the second edition was lowered to 5 from 6.&#10;&#10;