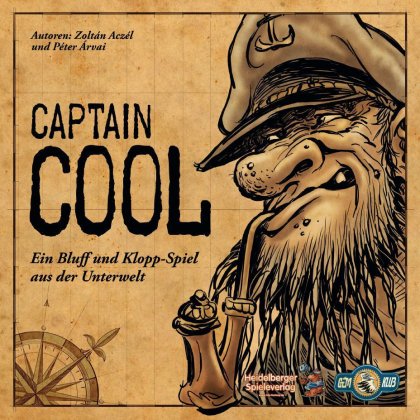 The game of bluffing and strategy in the criminal circles!&#10;&#10;The pubs of the harbor district are bustling with activity. Every night gangsters and other vigilantes are starting fights and brawls. They are agitated, because soon Captain Cool and his two brothers-in-arms will choose a few of the young and most talented criminals and their gangs to handle the black market in the harbor. So everyone tries to impress the three bosses with their courage and their abilities. They try to win as many bar brawls as possible to recruit new associates for their cause and earn the respect of the bosses.&#10;But brute force alone will not win the prize! They need to be skillful, cunning, and ruthless as well to become &rdquo;made&rdquo; men.&#10;Who will be the chosen one? Who knows best the tricks and skullduggeries of old Captain Cool, and has the guts to use them? (from the back of the box) &#10;The Hungarian (original) edition of the game is based on the main characters of a novel and the graphic novel inspired by the book: Piszkos Fred a kapit&aacute;ny by Jen&#197;&#145; Rejt&#197;&#145;. The same character drawings can be seen in the international edition as well.&#10;&#10;Players place their Family Members (figures) in 7 areas of the gameboard (in 4 pubs and to 3 Gangster Bosses) using simultaneous card selection to gain Gangster Cards in Affrays in the pubs. Later they place the cards in the Big Deal circle where they get points for creating chains of gangsters. Most points wins.&#10;&#10;