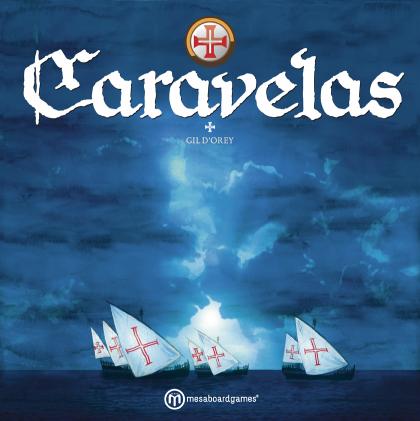 The game theme is the Portuguese Discoveries in the 15th and 16th century, and their contribution to Portuguese wealth, symbolized in the Jerónimos Monastery. It is an historic fact that the spices trade, brought by the Caravelles, had to pay a tax of 5% in Lisbon, and this tax was used to pay for the monastery construction.

The goal is to achieve the highest possible number of victory points (VPs). The game ends when the last piece of Jeronimos is bought by any player.

The boardgame is the world map with 32 ports / destinations marked around the world (Americas, Africa, Asia and Indic Islands). In 8 of them you can collect the respective merchandise from that port. The board has also marked the real sea currents that the Caravelles followed at the time. It is surprising that often the fastest way is not the shortest, and the game reveals that perfectly.

Each player has a card representing 3 ships, and indicating the player's ability to travel (translated into 9 navigation discs) and the cargo capacity (translated into 6 different merchandise spaces).

The players place their wood ship piece in the board in Lisbon and start navigating. If they follow the sea currents marked in the board, they can do it "free of charge" and endlessly. But they wouldn't go very far. Every time a player wants to go in a different direction than the one indicated by the sea current, he has to use a navigation disc from his player card. When all the navigation discs are used, the player turn stops. So, in each turn, a player can go against the currents at most 9 times, thus determining how far he can go.

During navigation, players arrive in ports. If they are the first to get there, that is, if they are the ones that discover that local, they can place their coloured marker in that port and register the number of VPs marked for that port. If the port is a "trade port" (there are 8), the player can also collect the respective merchandise and place it in his player card.

But there are also some possible surprises. When navigate, players can pass by special marked cells which force them some kind of effect:

- "Event" cells: for each round, players have 5 "Event" cards in their hand; when they pass over these cells, they must choose a card from their hand. These cards can be of 3 types: "Storm Card", "Dead Calm Sea Cards" and "Good Wind Cards", thus having negative or positive effects in their navigation. But they also have an effect on other players, but for these the effect is always positive. This creates interest during players downtime.
- "Pirate Cells": when passing over these cells, players lose immediately 1 of their navigation discs. they can only enter the cell if they have the necessary disc available to pay.
- "Sinking Cells": when passing over these cells, players must take their chance with a 50/50 dice - worse can happen is they lose 1 of the 3 ships they have (or 4 - see below), and the corresponding cargo space. They will only get it back when they arrive in Lisbon.

After some time of navigation, of discovering new ports and collecting one each of the possible 6 merchandises that his player card can carry, the player returns to Lisbon.

In Lisbon the player can:
- trade merchandises per VPs (5 each)
- specifically, the merchandise "pepper" can be traded for 1 piece of the Jeronimos Monastery which worths 10 VPs, which are immediately registered
- the player can also trade 15 VPs for a 4th ship - this 4th ship gives him 3 more navigation discs (increasing it's navigation autonomy from 9 to 12) and 2 more merchandise space cargo.

At the beginning of the game, each player receives a number of Objective Cards with specific Ports. If they are the first player to get to that port, they will receive 5 extra VPs per each at the end of the game. These VPs can be decisive in the victory decision.