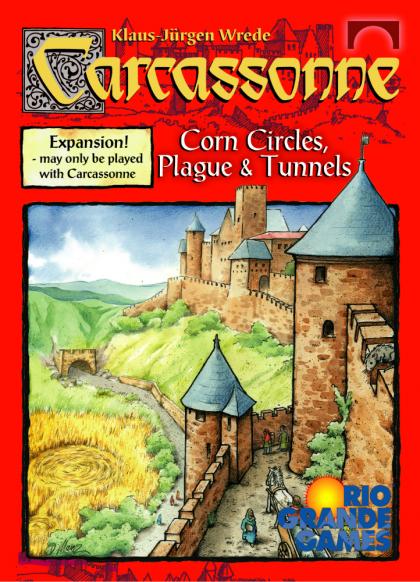 The information that BGG has on this item indicates that Carcassonne: Corn Circles, Plague & Tunnels will not enter production. This entry currently serves as a placeholder for the announced item and will likely later be removed.

Carcassonne: Corn Circles, Plague & Tunnels includes the components from three small expansions each previously published on their own: Crop Circles, The Plague, and Tunnels.

Corn Circles, the seventh official mini-expansion for Carcassonne, consists of six tiles depicting crop circles made from corn stalks. A corn circle tile allows a player to place a second follower on an already-claimed feature or return an already-placed follower back to his supply.

In Plague, first released in issue 2010/6 of Spielbox magazine, pestilence descends upon Carcassonne, spreading under the players' control across the landscape tiles and carrying off any followers unfortunate enough to be located there.

Tunnels, a small expansion that appeared in issue 2009/6 of Spielbox, consists of only four tiles and two tokens for each player. In addition to your normal tile placement and optional follower placement, you may place one of your tunnel chips on any exposed tunnel entrance (whether on a tile from Tunnels or from another expansion) on the table, regardless of whether that entrance is on the tile you just played. Once both of your tunnel chips have been placed, they connect the two roads, wherever they might be.