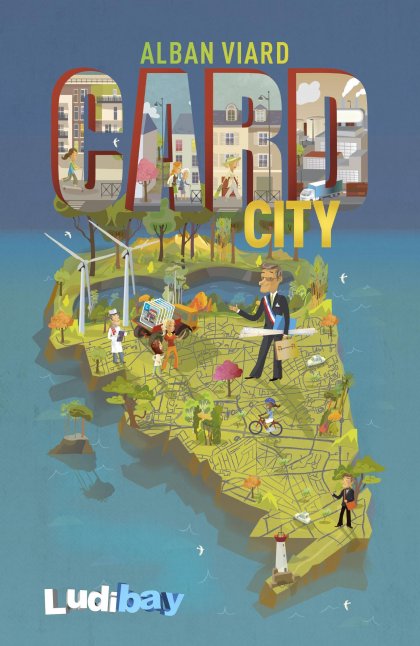 In Card City &ndash; part of Alban Viard's &quot;Small City&quot; trilogy of games, which includes the similar but three-dimensional Town Center &ndash; you will take on the role of the newly sworn-in Mayor. Your job is to encourage the growth of the residential, commercial, industrial and cultural districts that make up your home and to satisfy the demands of the city's residents. Card City includes six type of cards: Residences, Commercials, Industries, Leisure, Parking and City Hall. The game is divided into ten rounds, and each round consists of five phases:&#10;&#10;&#10; Players gain two new buildings (i.e., two cards) through an &quot;I cut, you choose&quot; game mechanism that includes hidden cards.&#10; Each player constructs the new buildings in his city according to zoning laws.&#10; When the environment is favorable, residential and commercial districts attract new citizens, and the cities begin to evolve.&#10; Players earn money from their city thanks to their commercial districts.&#10; The first player position changes.&#10;&#10;&#10;At the end of the game, a district of one residence card scores 1 victory point (VP), a district of two residence cards scores 1+2 VPs, a district of three residence cards scores 1+2+3 VPs, and so on. In addition, each five money left is worth 1 VP. If the player has not finished his city, he earns negative points!&#10;&#10;