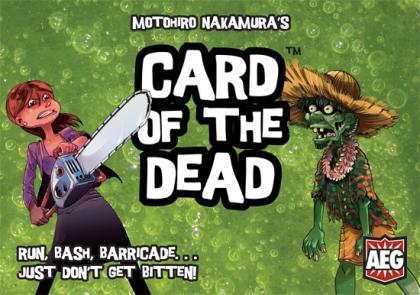 Card of the Dead

In the survival action card game Card of the Dead, players are trapped in a town full of zombies; engulfed in the scourge of terror, they must try to survive the zombie horde. Some will frantically seek to flee the city, others will seek to barricade themselves in buildings against the terrible siege. By not getting surrounded, and through the use of both luck and brains(!), you will be able to survive the night.

In game terms, from a deck of cards containing zombies, items and events, players are dealt a hand of cards. Each turn, players draw a card. If the card's a zombie, the player places it in front of himself; if not, he adds the card to his hand and plays one card of his choice. Certain items give the player a chance to flee. The player who first lays down a predetermined number of escape cards – or who is simply the last one alive – wins the game.