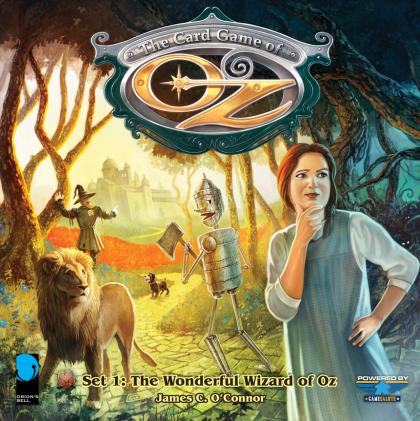 The Card Game of Oz

Over one hundred years ago, L. Frank Baum introduced the world to the wondrous Land of Oz. Now, experience these familiar characters, fantastic locations, and disturbing creatures as never before imagined.

The Card Game of Oz introduces an innovative new game system called the Storyline Game System™ that adds strategy to your challenging and fun adventures through Oz. Each player takes on the role of an author attempting to construct the best story in the world of Oz. During the game, players will attempt to bring together objects, characters and locations that are appropriate together – for example, the Tin Woodman and his Oil Can – while avoiding hazards like the field of poppies and terrible beasts and villains like the Kalidahs or the Wicked Witch of the West.

Each round players roll a special set of dice to determine the number of points they have for drawing and playing cards. The number of dice increases during the game, allowing the game to scale naturally while you play. The game ends when a player is able to move a Prime character – that is, one of the main characters of the story – from her Title card all the way to The End, but doing so is no simple race because the character who triggers the endgame is worth no points toward victory.

Featuring hundreds of fascinating characters, events, and vistas, Oz is a world that has stood the test of time. Construct an iconic tale that is all your own!