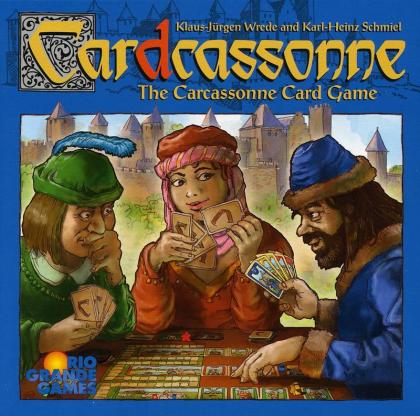 In Car(d)cassonne, players place their cards in different rows to increase the scoring for that row. Whether in the field, the city, the road or at the abbey, you must ensure that cards placed will earn you more points than your opponents.

However, sooner or later, every player has to claim one of these series of cards to get points. If you wait one more turn, there will probably be a greater number of cards in the row. By cons, it is possible that another player take the opportunity! You should be alert in this game stretched to wrenching choices.. Rebuild Carcassonne: one card at a time!

The game is played over a number of rounds, with a number of cards per round, both based on the number of players - in a way that you get through the entire deck of cards.

In each turn you either play your only meeple to the end of a row of cards to claim them, or play a card to a row matching the colour on the card. The first card played each round must be face down and does not have to follow suit. When all cards and meeples have been played for the round points are awarded for cards claimed.

The different types of cards score in different ways:
People cards - add up their printed values and multiply with the number of people cards. Then remove cards from game.
Animal cards - compare the number of animals to the reference card for points. Keep cards in front of you. Animals of the same type claimed in previous rounds are also counted.
Building cards - are placed facedown under the chest token until the end of the game. Points are awarded for sets of colours.
Colour-mismatched cards can be discarded for 10 points each or add to a collection of animals/buildings.
Dragon/fairy cards - score 10 points each and are removed from game.