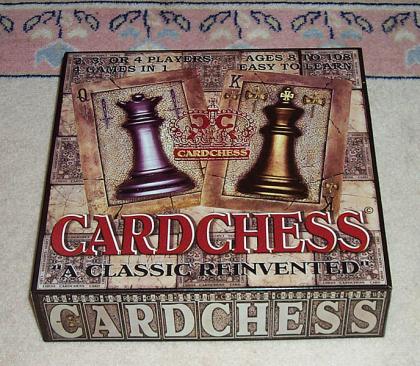 In this chess variant for up to 4 players, the game is played on a 10x10 board with four suits of sixteen cards corresponding to traditional chess pieces.

Four games can be played with this set.

Cardchess: Players shuffle the 16 cards of their suit and place them randomly face down in eight pairs of two on the letters A, R, D, C, H, E, S and S. Each player has two moves each turn. They first turn over a card. Second, they pick any face up card and move it according to chess rules. To win the game, a player must capture all of his opponents' Kings by checkmate. Once a King is captured, all the pieces from his team are removed from the board.

Memory Cardchess: All player cards are shuffled together and placed face down on the board in a configuration which depends on the number of players. On each turn, players have two moves. They first turn over a card. The card remains face up if it is in their suit. If it isn't, the card must be clearly shown to other players so they can memorize it. Second, players move the card they just turned over or any other previously exposed card according to chess rules. To win the game, a player must capture all of his opponents' Kings by checkmate.

Traditional chess: The game board and cards allow to play a traditional game of chess.