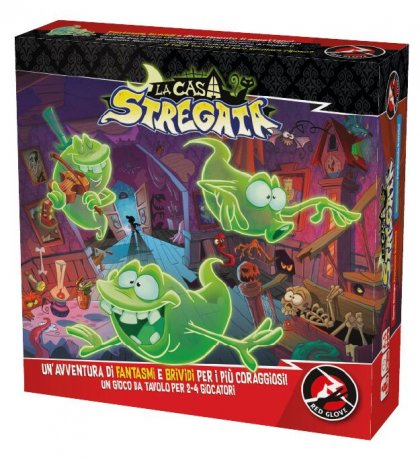 Strange noises come from the house!&#10;&#10;Legend has it that on the longest night of the year, in the haunted Whippole Manor, the terrible Ghost Buu and his henchmen wake up and go around the city to scare the inhabitants. Only a brave hero can stop them, finding the only thing inside the house that calms Buu and makes him return to his age-old rest ...&#10;&#10;&hellip; His ghost teddy bear!&#10;&#10;The haunted house is a very simple game, inside the box you will find some tiles that will be used to represent the rooms and corridors of the house.&#10;&#10;After placing the tiles to represent a haunted house, place all the characters on the starting tile the last one who was in a haunted house starts playing! Roll the die, make your move and flip the arrival tile, performing the action shown on it.&#10;The objective of the game is to find the tile containing the ghost bear and bring it back to him to win the game.&#10;&#10;