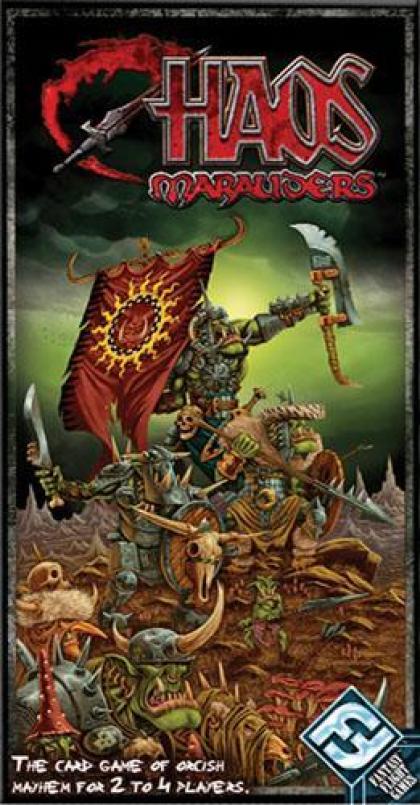 Here the players find themselves as Orc War Chieftains on their way to fight those intolerable forces of the Empire. Only problem is that several Orcish clans have run into each other so inevitably they start to squabble over the carcass of some unfortunate Elf that is roasting over a campfire. In the time it takes for the sun to move from up to just a little more up the Orcs are at it and it’s each Orcish War Chief for himself.

Each player is trying to create armies, which are placed into 3 battle lines or formations. Each line must have one musician and one standard bearer and each of these must be placed on the far left or right of each line. Each line can be up to 12 units long but a player can create a shortened battle line by placing the two required units closer together.

Each turn a player will draw one or more cards from the deck. Units drawn must be placed whilst other cards are discarded for their effects. Once a battle line has a musician and a standard bearer and all spaces in between the two are filled )with units or loot), that line can go to war and attack the battle line of another player. All units are worth a battle rating. Both sides simply add up their ratings for all units and the highest total wins, although the roll of a fate dice can still mix things up.

The winner can take any loot present from the defeated player's line and this is in truth the main aim as loot is worth points that are tallied up at the end to determine the winner.

Chaos Marauders also allows for players to try and construct larger units made up of multiple cards such as War Machines.

See also: Summary of differences from the first edition of Chaos Marauders.