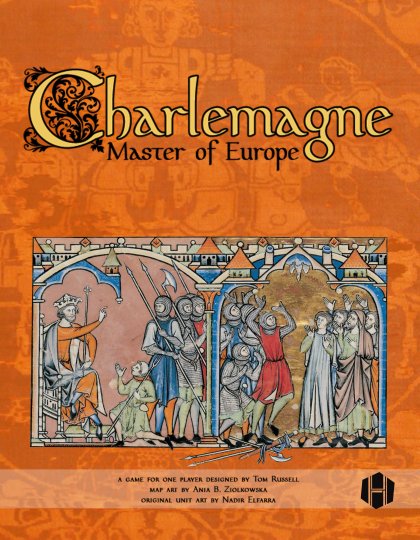 Description from the publisher:&#10;&#10;At the age of twenty-nine, Charles I became sole ruler of the Frankish Empire. What he did with that power over the course of the next forty-plus years is the stuff of legend. His unparalleled achievements in warfare, diplomacy, administration, and culture led to the sobriquet Carolus Magnus: Charles the Great: Charlemagne, King of the Franks and of the Lombards, and Emperor of the Romans.&#10;&#10;In this solitaire strategy game, you assume the Frankish throne, and seek to duplicate - or exceed - Charlemagne's singular genius, while hopefully avoiding some of his mistakes, such as the famous defeat at Roncevaux (immortalized in the Song of Roland). As you conquer new territory and incorporate it into your empire, you'll need to contend with rebels and palace intriguers. Building public works and patronizing the Carolingian Renaissance will increase your prestige and wealth. Along the way you'll need to win the support of the papacy, buy off Viking marauders, convert the pagans in Saxony, contend with incursions from Al-Andalus, build a powerful army, and maintain detente with the Byzantine Empire.&#10;&#10;Gamers who are familiar with the game Agricola, Master of Britain will find many similarities between it and Charlemagne: Master of Europe, though this is a longer and more complex game, with its own nuances. The core mechanism of cup adjustments is of course alive and well. Chits representing enemy units reside in one of three cups representing how they feel about your rule: Friendly, Unfriendly, or Hostile. Chits are drawn from the hostile cup and placed on the map, manifesting themselves as overt challenges to your rule. Every action you take will subtly change their stance, blindly moving chits from one cup to another.&#10;&#10;