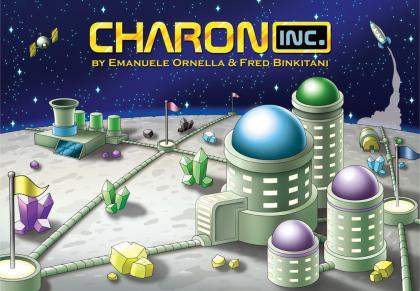 In the year 2288, off-world mining is now controlled by a few mega-corporations. It is no longer just people or nations that are subject to exploitation, but entire planets and moons. As the CEO of one of these mega-corporations, in Charon, Inc. you will vie against CEOs of other corporations as you exploit the planet’s resources and colonize Charon, the largest moon of the dwarf planet Pluto.

You will stake claims to the various mining regions of Charon, acquire resources for building facilities, use special actions (fair and unfair) to gain advantages over other CEOs, and build your empire to achieve victory in this fast-paced game of planetary domination!

Game Summary
The board shows Charon divided into several regions. Each round, seed the regions with a mix of gems. Players start with a hand of building cards: at the start of each round, everyone puts one into a common pool. At the end of each round, you get additional cards.Players' bidding flags start out 1 in each of the special power areas. Go around bidding till each player has just one flag unspent. Bid by moving a flag from its space to a location on the board -- in a region, on a border btwn 2 regions, or on an intersection (corner) touching 2-4 regions. After all bids placed, use the special power where your last flag stands -- that is a pretty cool twist, where you have to decide which special power you want to try for (but you only get it if you're alone on that power; or if there's 2 of you in a 5er game!). Then resolve each region: the player with the most flags in/around it wins all the gems. Ties broken by seniority, where a flag is more "senior" if it affects fewer regions (center then edge then corner).

After all gems collected, players (in turn order) use their gems to build cards from common pool and/or their hand (but may never build cards with same number). May trade gems (3:1?) to get the colors you need, and may only save a limited number of gems from turn to turn. Some special powers change trade ratio and holding limit.

After 5 rounds, player who built the highest sum of buildings wins.